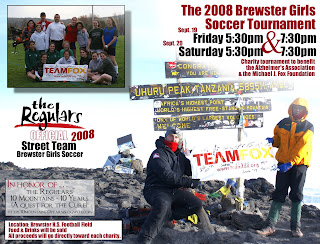 Eric is up to tournament number 2 this year.
Eric is from "A Trail Called Hope - III - Mount Hood. He also went and climbed Kilimanjaro about two weeks after returning from Mount Hood this year, and brought back a bunch of information and personal experience to help the team with this years coming climb.

The Brewster Girls Soccer Team will be helping "the Regulars" to kick Alzheimer's and Parkinson's by raising awareness at the tournament which Eric has designed for 2008. This is a perfect example of being creative in the ways you can help to raise awareness for Alzheimer's & Parkinson's as well as fund for research. If anyone is in the neighborhood stop by and meet up with Eric (Gladiator) and say hi to the girls.

In the attached flyer you'll notice Eric had the girls sign a Team Fox banner then he took it to Mount Hood and Kilimanjaro (where he photographed it again).

That's really cool that a young soccer team is making aware of what The Regulars are planning. It's nice to know that young people are involved in making people aware of Alzheimers & Parkinsons and helping out :D.

My dad was diagnosed with Parkinson's disease his symptoms were shuffling of feet,slurred speech, low volume speech, degradation of hand writing, horrible driving skills, right arm held at 46 degree angle, but now he finally free from the disease with the help of total cure from ULTIMATE LIFE CLINIC, he now walks properly and all symptoms has reversed, he had trouble with balance especially at night, getting into the shower and exiting it is difficult,getting into bed is also another thing he finds impossible.we had to find a better solution for his condition which has really helped him a lot,the biggest helped we had was ultimate life clinic they walked us through the proper steps,am highly recommended this www.ultimatelifeclinic.com to anyone who needs help.