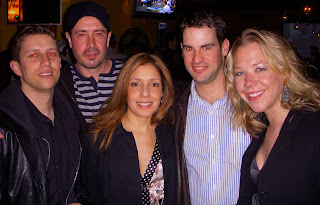 "The Regulars" Coppersmith’s Bar Event (April 5th. 2008) was a great success I have to thanks everyone who came out for us! But, first let me start out by thanking my Street Team; Stephen, Chris, Brian, Marsha, Carmelita & Deepak. They did a massive job at coordinating the venue, creating and sending the Evites, checking the door as people came in, the whole 9 yards.

There were 3 people from this years Mount Hood 2008 Team there including Eileen & Eric.

I had some of my friends from MySpace turn out – who I never met before. Red came out (you can find her in my second top friend spot)! Sandra also came up from Jersey to make sure that Eileen didn’t get out of control!

We had Alicia from the Alzheimer’s Association come down with one of her friend’s who I might ad is a hugely accomplished photographer & writer!

We had 4 beautiful Alzheimer’s research scientists come out from NYU.

Brad from the Dewey Knights came out with a friend of his. Some of my relatives came out!

There were ton’s of people from Hoboken.

All in all there were probably more than a hundred people there.

It was a great time, with a lot of positive energy for 2 great causes – Alzheimer’s & Parkinson’s.

I wish more of you could have come out, but there will be more opportunities in the future.

Check the MySpace photo album & the Facebook photo album over the next few days for photos!