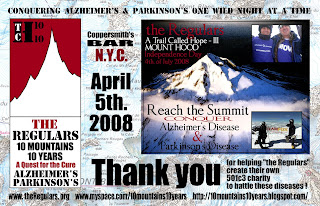 Hey it’s going to be an interesting night for the Regulars on the whole which I’ll write more about later during the week, so check back in on us.

I’ll tell you a little bit about what’s happening tonight but first let say that we have just officially started our fund raising effort for 2008. If you’d like to make a tax deductible donation to either the Alzheimer’s Association or the Michael J. Fox Foundation please click through on the following links.

On behalf of more than 30 Million people world wide suffering with Alzheimer’s or Parkinson’s disease I ask for your support in the form of a donation to one or both foundations!

Research is fueled by donations from Regular people just like you and I. We all have a hand to play in bringing down these two giant diseases.

Now just a quick heads up, tonight the Regulars Street Team 2008 has put together a social event which will be held at Coppersmiths in Manhattan. Steve, Chris, Brian, Marsha, Carmelita & Deepak have really done a fantastic job coordinating this whole event. We will be using the proceeds to create a new 501c3 charity corporation so that in the coming years the Regulars can pull out all the stops and raise more funds for research than we could have ever hoped for as little band of climbers. This is going to prove to be great over the next few years...I can feel it.

It’s going to be a wild - wild - wild time, and my thanks goes out to all who attend! You will be helping us step into a much greater and more productive arena from which to battle Alzheimer’s & Parkinson’s!

World up,
Enzo
Posted by The Regulars at 5:44 PM